Changes needed at the BBC 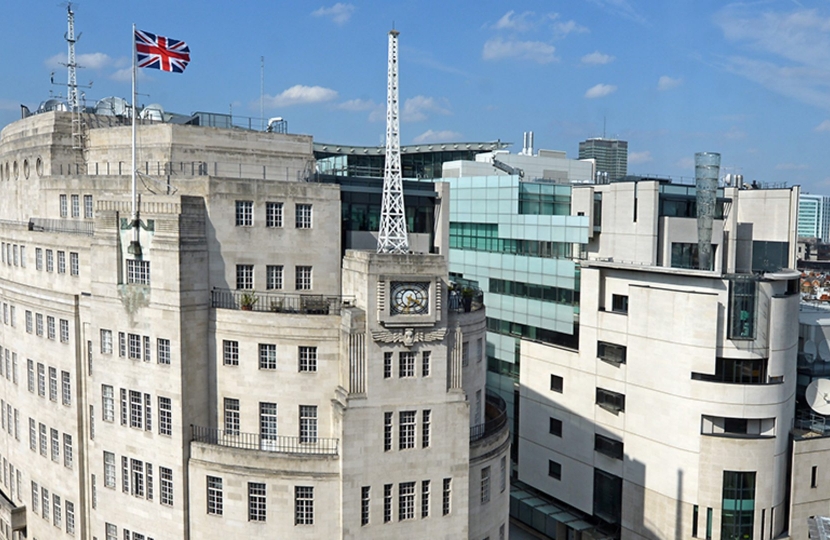 Following my letter to the new Director-General last weekend, the BBC has today, 2nd September, announced a U-Turn on its decision regarding the Last Night of the Proms.

The BBC has reversed its decision not to have Rule, Britannia! and Land of Hope and Glory sung at The Last Night of the Proms.

The U-turn follows fierce criticism sparked by reports that the lyrics were being dropped due to associations with colonialism and slavery.

Last week, the BBC said the decision to perform orchestral-only versions was prompted by Covid-19 restrictions.

However, a "select" group of singers will now perform the songs after all.

To read about the BBC's decision read their article in full: https://www.bbc.co.uk/news/entertainment-arts-53998584

In the Sunday Telegraph on 30th August, political correspondent Harry Yorke commented on my letter, co-signed by colleague MPs, to the new Director of the British Broadcasting Corporation, Tim Davie.

A group of 14 Conservative MPs have written to Mr Davie this weekend, claiming that the BBC is “fundamentally failing” to reflect the “diverse perspectives and interests” of the public in its output.

They cite the row over the Proms as the latest example and urge Mr Davie to reinstate the lyrics of the songs, as well as addressing what they describe as a “distinct lack of impartiality in BBC reporting and commentary.”

To read my letter in full CLICK HERE or read below:

CHANGES NEEDED AT THE BBC

Welcome to your new role. We hope this will be one of the first letters on your desk.

My colleagues undersigned and I are writing to you on behalf of our constituents to tell you that, in our opinion, the BBC is fundamentally failing under section 10 of the BBC Charter to ‘ensure that the diverse perspectives and interests of the public and audiences, including licence fee payers across the whole of the United Kingdom, are taken into account’. Your predecessor believed that the BBC reflects the voices of the whole of the UK. This is simply not the case and his coverage in the press today was too little too late.

With regret, and given a multiplicity of recent examples, the BBC is now increasingly seen by licence fee payers as anti-British and politically biased; focused on delivering for the ‘on-demand metropolitan elite’, and being out of touch with its core audience who want an independent and impartial national broadcaster. The BBC once embodied that idea – and we want to see that once more.

Our most recent cause for concern is the BBC’s proposed change to the Last Night of the Proms. To our knowledge, not a single constituent has ever raised a complaint about the lyrics or connotations of ‘Rule, Britannia!’ nor ‘Land of Hope and Glory’. As the national broadcaster, the BBC should have explored the full context of those lyrics within British history. Instead, all the BBC can offer is censorship and ahistorical apologism for doing so.

As elected Members of Parliament, we urge you, as the new Director-General, to ensure that the BBC not only reinstates the fully-sung version of ‘Rule, Britannia!’ at the Last Night of the Proms, but to go a step further and reinstate the BBC Radio 4 UK Theme that so heavily featured it, and which was removed so mistakenly in 2006.

There is a distinct lack of impartiality in BBC reporting and commentary. From the frequent employment of former Labour activists, such as Lewis Goodall and Rianna Croxford, without equivalent Conservative representation; to the presentation of left-wing activists as regular, unaffiliated people in BBC News segments; to the episode of Panorama on PPE that even the BBC itself admits broke impartiality guidelines, the BBC’s recent output has not reported on or represented our national life.

It is because of these failings and others – a reflection of the BBC’s lack of viewpoint diversity – that an increasing number of ordinary citizens no longer wish to fund the BBC nor watch it. The BBC is in danger of becoming an irrelevance in our national life - and it is important we make it clear to you that, although we want to see the BBC prosper, with its current output and outlook our constituents no longer consider it sacrosanct. We are of the opinion, therefore, that the compulsory payment of the licence fee must be adjusted accordingly.

The BBC is paid for by the licence fee payers. If someone does not pay their licence fee, they can ultimately go to prison, regardless of whether they consume BBC broadcasting. The British public expects the BBC to provide factual and unbiased news. They want to know the good things that happen in the UK as well as issues that should give them cause for concern.

We urge you, as incoming Director-General, to think deeply about the future direction of the BBC and to address these issues with the utmost urgency. It is a matter of such importance to our constituents that we will simply not be able to disregard it any longer.

For and on behalf of:

BBC TV Licences for the over-75s

Pressure on the BBC for over-75s licences

There has been much debate on the subject of TV licences for the over-75s.