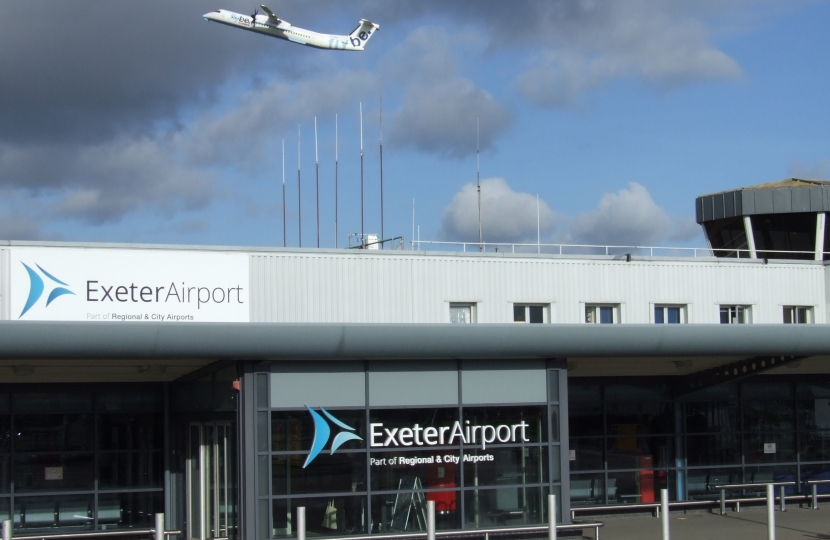 Chris Loder, MP for West Dorset, and East Devon’s Simon Jupp MP have united in a message of bitter disappointment at the news this morning that Europe’s largest regional airline, Flybe, has gone into administration. The news comes despite government’s intervention last month in a bid to support the troubled airline. News of Flybe’s collapse will put extreme pressure on the viability of Exeter and Southampton Airports, both vital travel connections in the South West, with a majority of flights operated by Flybe.

Chris Loder said: “Exeter Airport is crucially important to the South West, a region that in so many ways has been left to trail behind the rest of the UK when it comes to transport links. It is vital to those working and living in West Dorset and neighbouring East Devon, enabling them to travel onwards to domestic and European destinations whether on business or pleasure. It is also a key connection for incoming visitors to the South West and any threat to its future will have a knock-on effect to tourism and the economy of the region. I am very sorry about the inevitable job losses created as a result of this announcement and will do everything I can to support those affected, as well as to encourage other airline operators to pick up on the opportunity to work with us here in the South West.”

Simon Jupp, MP for East Devon, said: “My thoughts are with the hard-working Flybe staff at Exeter Airport at this difficult time. I will do everything possible to support them. The government offered to help secure the future of the airline and I’m deeply disappointed by the decision taken by Flybe’s shareholders. It is essential other operators now come forward to take over routes from Exeter Airport to secure jobs and lifeline transport links for our region.

More than a third of Flybe’s 3000-plus employees are based at the airline’s Exeter headquarters.

Government information for employees, passengers and suppliers affected by the collapse of Flybe:

In a communication received this morning after the administration of Flybe was announced, Nathan Stower acknowledged that Flybe played a vital role in delivering essential regional connectivity for the South West and that his thoughts are with affected staff and impacted customers and airports during this difficult time. He says:

"Virgin Atlantic (30%), along with Stobart Group (30%) and Cyrus Capital Partners (40%), formed the Connect Airways consortium which intervened in January 2019 to prevent the then imminent collapse of Flybe. Over the past 14 months the consortium has invested more than £135m to keep the airline flying and begin its transformation. Sadly, despite the efforts of all involved to turn the airline around, not least the people of Flybe, the severe impact of COVID-19 on Flybe’s trading means that the consortium can no longer commit to continued financial support.

"The impact on COVID-19 on global demand for air travel has been severe. Virgin Atlantic has already taken a number of cost-saving measures itself to counteract the significant impact on our revenue, and yesterday we went further, including voluntary temporary pay cuts for senior managers (including a 20% temporary pay cut for our CEO) and voluntary unpaid leave for other employees. In recent days a number of other UK and global airlines have also announced significant reductions in capacity and other measures."

Impacted Flybe customers are being directed to the Civil Aviation Authority’s website for information. Impacted Virgin Atlantic customers are encouraged to SMS 07481 339184 for the latest advice.