My insights on the UK Internal Market Bill 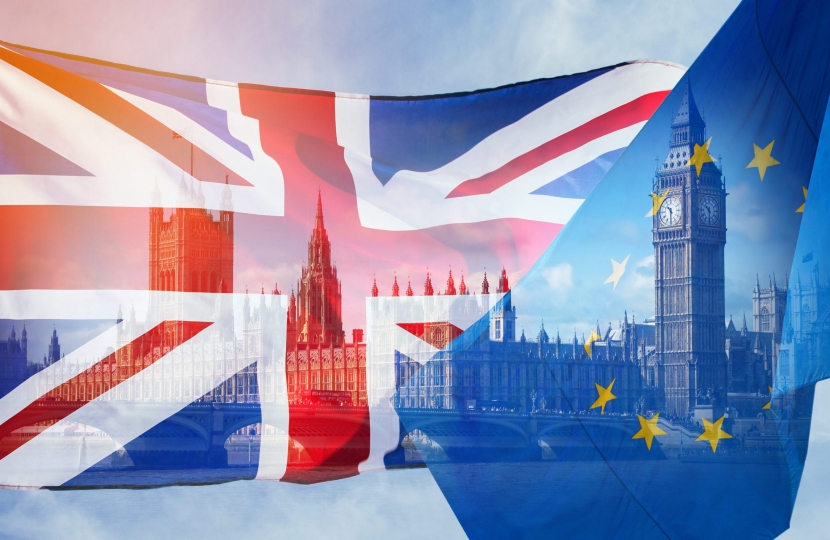 I’m pleased to share with you my insights and views so far on the UK Internal Market Bill:

We find ourselves in this situation because HM Government (HMG) has reached an impasse with the European Union (EU) in negotiating a trade agreement. There are two reasons for this impasse:

If this impasse is not resolved, and a no-deal Brexit is possible, Parliament must support the Government in ensuring the territorial integrity of the UK.

HM Government does not want a no-deal Brexit and that is why we passed the EU Withdrawal Bill into law earlier this year. This Act included specific internal customs arrangements with Northern Ireland in order to ensure frictionless trade on its land border, which took a form not dissimilar to the ‘backstop’ that so many were concerned about last year. This arrangement within the Withdrawal Act itself was a statement of goodwill to the EU, even though politicians from Northern Ireland had their reservations.

We are now in a situation where, in the event of a no-deal exit, with no trading agreement in place, the EU is threatening to activate an enforced customs border between Great Britain and Northern Ireland, frustrating the territorial sovereignty and integrity of Northern Ireland.

Such refusal would mean that the EU could prevent the movement of essential food and supplies from Great Britain into Northern Ireland. In my mind this is a clear attempt to divide the United Kingdom and, as Member of the United Kingdom Parliament, I cannot stand by and let this become a reality.

It is not HM Government’s intention to break international law – contrary to common belief. This Bill itself does not break the law, but it does give powers to HM Government to go against a previous international treaty in a worst-case scenario where there is no alternative. This is to preserve the United Kingdom of Great Britain and Northern Ireland, albeit with a current amendment that will need Parliament’s permission.

We either act to preserve the United Kingdom’s integrity or we stand by and run the risk that, without this Bill becoming UK law, the EU could make decisions on behalf of Northern Ireland without the need for Northern Ireland’s consent. It amounts to a foreign power frustrating a sovereign nation.

Therefore, in Parliament over the coming weeks we need to choose from one of two options:

It also means that the EU would have a say over what goods and produce we could or could not move within our own country, meaning Great Britain would require EU permission to send food and supplies to Northern Ireland – part of our own country. This would create tariff borders inside the UK and put us in a position where if, for example, Northern Ireland experienced shortages which are usually remedied by importing from other countries, we would be unable to send supplies over the Irish Sea without the EU’s say-so or considerable tariffs. Many believe this would be the beginning of an annexation that would allow the United Kingdom to be broken up.

The Good Friday Agreement, and the peace it has achieved, could be threatened

The Government has committed to protecting the terms set out in the Good Friday Agreement, specifically that all parties must agree to border and boundary changes.

We do not put an agreed treaty into question at any time by voting against this Bill.

Passing the Bill will put us in a stronger negotiating position to achieve an EU trading agreement.

Northern Ireland will remain within the territorial sovereignty of the United Kingdom whatever happens if we vote for this Bill.

Frictionless trade will continue between Great Britain and Northern Ireland regardless which will support our economy and our British producers.

We keep our promise to fishermen and protect them from the EU’s predatory supertrawlers. Our Government has firmly made a commitment to fishermen that they will not be sold out due to Brexit and the Government is standing by that commitment.

We allow the UK Government to invest in communities across all of the home nations, bolstering our economic recovery from coronavirus. The Bill will, from January 2021, provide the UK Government with new powers to spend taxpayers’ money previously administered by the EU.

Some believe, as it passed the second reading on the evening of Monday 14th September, that the Bill has become law. It has not. A ‘second reading’, gives permission for the Bill to progress further through the parliamentary process, which it is now doing, and with much debate to come this week and next.

The Bill in itself does not break the law and we have made sure that the Government would need parliamentary authority to breach a treaty obligation. But this Bill gives powers to HM Government to act to preserve the unity and territorial integrity of the United Kingdom of Great Britain and Northern Ireland which is currently at risk if, paradoxically, the EU force us to a no-deal exit.

In my opinion, we are not seeing the EU acting in good faith. It is attempting to corner us, and paradoxically it is starting to feel that the EU itself is wanting to force a no-deal exit just to break up the UK.

Now is the time that we must decide whether or not to preserve the Union of the United Kingdom albeit, potentially, with some consequences for our treaty with the EU. In my opinion, there is only one right answer. We must protect the Union first and foremost.

I see it as my duty as an elected MP to ensure the territorial integrity of the UK which necessitates protecting the Good Friday Agreement, and in turn the UK Internal Market Bill, which ensures we have the power to create prosperity and keep peace on our islands.

The point about breaking international law means that a treaty between the UK and EU would only be broken if we were forced it - a no-deal situation, where the UK Government has no choice but to break a treaty commitment to maintain the unity of the United Kingdom.

As a member of the United Kingdom parliament I cannot stand by and run the risk of breaking up our Union, even if there are some consequences if we did not achieve a deal. From what I have seen and heard so far, I am therefore planning to support the Government in the hope that, in the end, none of these precautionary measures will be called on.