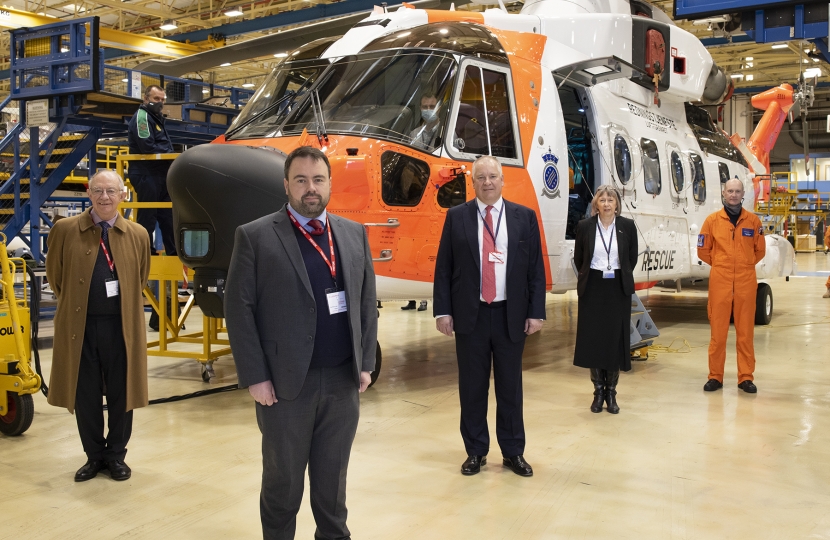 Chris Loder challenged the Government in the House of Commons on 21st September 2020, over redundancies announced the previous week at the Yeovil-based helicopter factory, Leonardo; and asked what the Government is doing to support the domestic production of  helicopters.

In response, Defence Minister Jeremy Quin committed to billions in funding for new helicopters in the UK, as well as supporting Leonardo in securing international orders. By asking about this in the House, Mr Loder has put this high up on the list of Government priorities.

The Government confirmed that it is now planning to spend £180 billion on equipment and support over the next decade, including £10.9 billion alone on helicopters.

The Leonardo factory in Yeovil is a considerable employer for many people in West Dorset, and Chris is committed to the future success of the factory.

Chris followed up with a visit to Leonardo Yeovil in December, at the invitation of Managing Director Nick Whitney, where he was delighted to be accompanied by former Chairman and retired Air Marshal Sir Christopher Coville.

Chris found it useful to learn more about the engineering sector in relation to helicopters, in particular about the capabilities of Leonardo; and the opportunities the company offers young people who are commencing their engineering careers as apprentices or graduates and of course understanding much more about one of our largest employers in the area.

You can hear Chris's speech again here: via YouTube