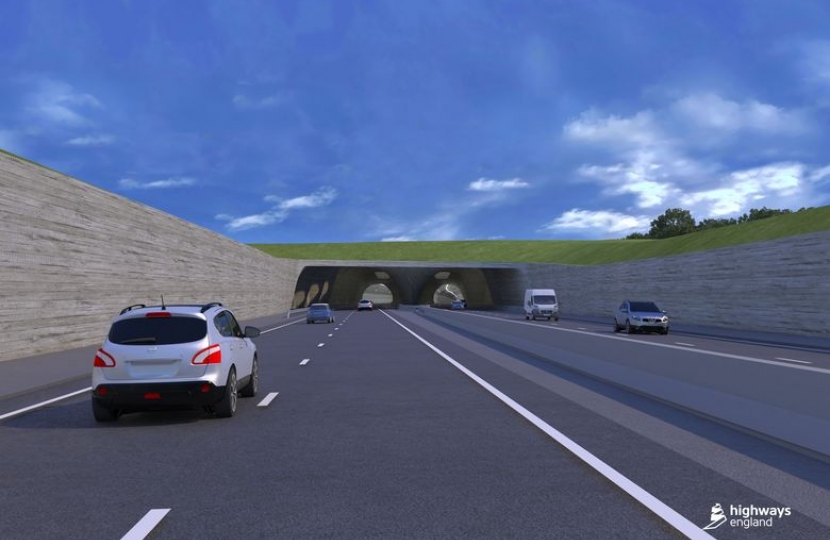 The A303 was singled out by Rishi Sunak as a headline infrastructure project during his Budget speech in the House of Commons today (March 11th).

Chris Loder MP has tirelessly lobbied government and ministers for better transport and road infrastructure for the South West. Just over a week ago, he intervened as MPs debated the High Speed Rail (West Midlands-Crewe) Bill Revival motion on 2nd March, pressing for assurance from the Minister of State that HS2 would not abstract from the Government's previous commitment to schemes in the South West, such as the A303 project. saying:

"I equally want to make sure that we are as supportive of the Government as possible. Those of us who are moving in this debate need to be absolutely assured so, in his summing up, I would like to hear the Minister give us the confirmation and assurance that HS2, particularly phase 2a, will not affect the Government’s previous commitments to deliver schemes such as the A303 and Great Western diversion resilience for the people who supported them." Chris Loder MP

At last, campaigning has paid off.

During his first budget speech today, which came just 27 days after taking up his position as Chancellor of the Exchequer, Rishi Sunak announced a £27 billion funding injection for roads across the UK, with a special mention for the A303 infrastructure project, saying:

"There is one more road I would like to mention, it is one of our most important regional arteries, it is one of those totemic projects symbolising delay and obstruction.

"The government has been trying to fix it since the 1980s and every year, millions of cars crawl along it in traffic, ruining the backdrop to one of our most important historic landmarks.

"So to the many honourable and right honourable members who have campaigned for this moment, I say this, the A303, this government is going to get it done."  Rishi Sunak

“This is a tremendous development for the South West and will mean much-improved connections for West Dorset and the surrounding areas. I will now carry on the work I have started, working with government to ensure the A303 project gets off the ground without any further delay.

This news, together with additional Budget announcements made on transport, infrastructure, skills, business and connectivity, means we are now making real headway towards levelling up the South West.”