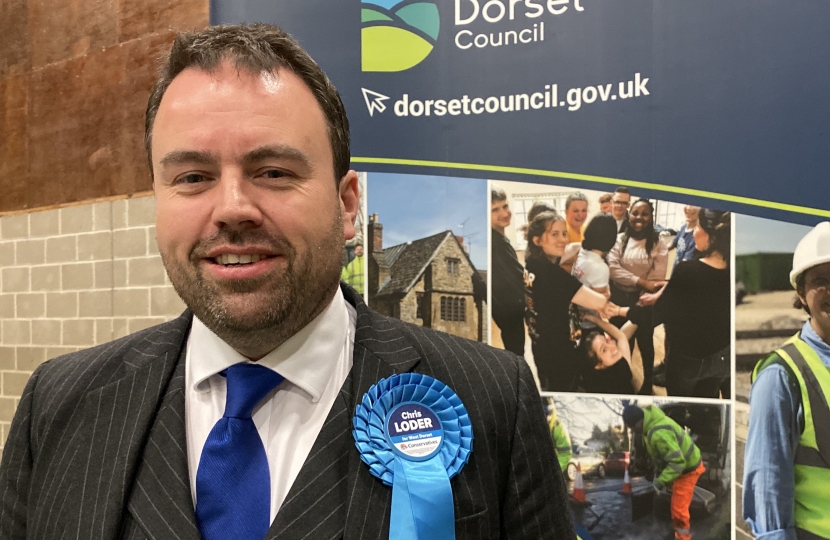 Chris Loder, 38, farmer’s son and railwayman from Sherborne has been elected to serve his home constituency of West Dorset as its Member of Parliament with a record number of 33,589 votes cast – the highest mandate (number of votes) ever recorded for a West Dorset MP.

The constituency cast their votes following 25 days of campaigning by candidates, during which Loder attended more than fifteen hustings and public meetings; welcomed the Secretary of State for Health and Social Care to West Dorset and met with farmers, business groups, students, parents of special educational needs children and carers.

Chris said: “My priorities are three-fold: 1. To deliver the democratic will and get Brexit done, 2. To be a voice for the needs of our rural communities and 3. To champion farming in Westminster on behalf of the nation”.

Born at the Yeatman Hospital in Sherborne, Chris enjoyed a rural upbringing on his family farm just outside the town where he is the 4th generation; he attended primary schools at Holwell and Bishops Caundle before secondary education at The Gryphon School, Sherborne.

He didn't go to university, instead aged 18 he began a railway career as a train guard on the Waterloo to Exeter line that runs through Sherborne, Crewkerne and Axminster. He progressed to lead a team of 300 running the UK's best performing train company c2c, as well as creating more train services and better connections for Dorset, including putting Corfe Castle on the national rail map for the first time, while also delivering the multi-million-pound upgrade of London Waterloo station - the largest in Europe.

During the lead up to polling day the MP, who has transport high on his agenda of local priorities, famously took time out for guard duty, helping to break the ongoing RMT rail strike. He said: “I feel strongly that this action, threatened for an unprecedented number of days, is totally unacceptable and the communities of West Dorset are being threatened by the RMT in an attempt to stop people getting to work, school or shopping. I have done all I can to make sure our vital train service continues to run”.

Following the election result announcement, the new MP said: “The result is a very clear statement from the people of West Dorset that they want the democratic will delivered. On Monday, I shall go to Westminster with that priority in hand and look forward to being a strong voice on behalf of the local communities I represent”.