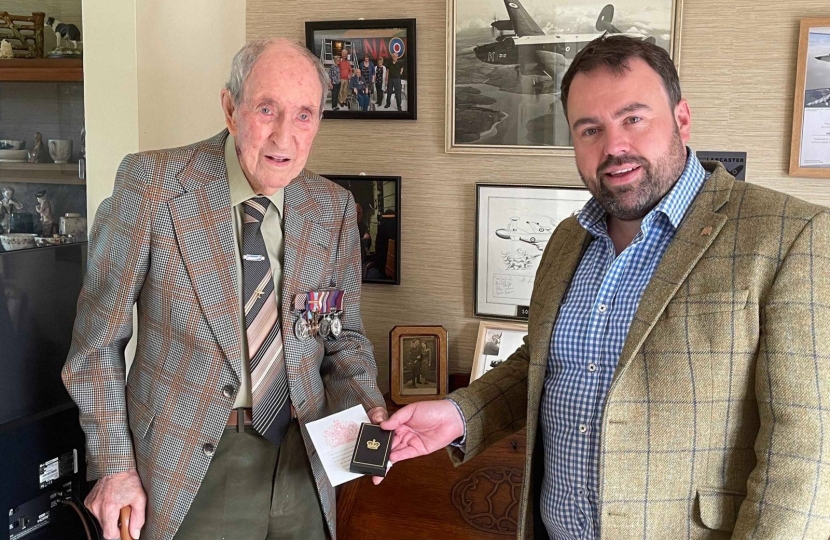 97 year old West Dorset resident Ken Symonds received a welcome surprise on Saturday this week: the Bomber Command Clasp he should have received for his heroism in action over 75 years ago, presented to him by Local MP Chris Loder.

Squadron Leader Mr Symonds’ neighbour decided to act after finding out he had not received the Bomber Command Clasp for his medals. After being told she could expect months to wait before Mr Symonds could receive his clasp, she then turned to local MP Chris Loder, who chased the matter up with the MoD as a matter of urgency and was successful in achieving a fast resolution.

Mr Loder said; “This was a small, but significant gesture of thanks to one of the last surviving members of our greatest generation, to whom we all owe so much. Ken served not just with bravery and distinction during the Second World War but throughout his 40-year career including action in the Falkland Islands.  It is only right that we ensure every brave veteran gets the recognition they deserve from the country for which they have given so much so freely.”

Mr Symonds saw service in North Africa, Italy, Australia, Hong Kong, Singapore, Canada, USA and Vietnam during his long career. He flew Lancaster bombers during WWII undertaking several bomber runs, and was on the very last Lancaster home on the very last bombing run (Berchestgaden) on 3 engines, the fourth of which had been taken out.  His crew then flew up and over Buckingham Palace on VE Day.