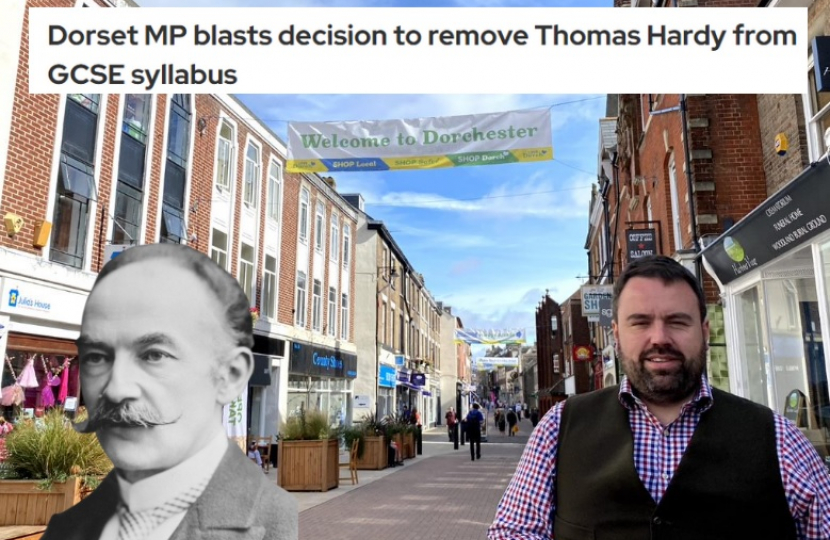 Mr Loder has said: “The recent attempts to erase some of the greatest literary icons of our history is of grave concern, not just in terms of educating our children, but also for maintaining Dorset’s unique cultural heritage that attracts people from all across the world through the literature of Thomas Hardy.”

The writer, who passed away in Dorchester in 1928, is most famous for his novels such as Tess of the D’Urbervilles, Far from the Madding Crowd and Jude the Obscure, many of which were deeply critical of Victorian Society and the perceived decline in status of rural people, particularly from Dorset.

Mr Loder continued: “While Hardy appears to have been side-lined in the name of diversity, it is important to note that Thomas Hardy himself had to climb a mountain from being the son of a rural builder who could not afford a University Education, to eventually becoming an Order of Merit who now lies in Westminster Abbey buried amongst Kings and the finest poets in history. He confronted social taboos, gave strong voices and stories to marginalised groups, and he challenged the conditions of the poorest in society through his work, often incurring the wrath of the establishment. He did at least as much, if not more for social justice in this country during his time, than many of the ‘progressive’ initiatives today.”

Mr Loder is the Member of Parliament for the area of West Dorset including the county town of Dorchester, Hardy’s place of birth and death 87 years apart and the backdrop of Hardy’s novel “The Mayor of Casterbridge”.  The town also plays host to the Thomas Hardy Society and the Hardy Players, an amateur dramatics society founded by Hardy himself in the early 1900s.